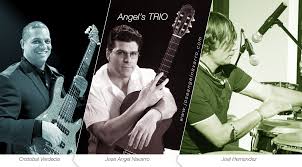 Jose Angel Navarro is the founder, musical director, and featured guitarist of The Navarro Virtuosi This unique world class ensemble is focused on Traditional and Modern stemming from a fusion of Afro-Cuban folk music. Since 2007, Jose has collaborated with other virtuoso master artists of various instruments and styles to create a unique musical art form that is constantly evolving. Collaborating artists include Joel Martinez, (percussion), Gerardo Aguillon (violinist), and Ransés Colón (Bass). Thus, was born The Navarro Trio!

Jose is an eclectic guitarist capable of moving freely between acoustic classical and electric guitar. His “brilliant virtuosi” style is a fusion of instruments highlighting the peculiar sound of the Gibson guitar. Listening regularly to the sound of the “ceremonial and traditional drums”, Navarro acquired a special kind of expertise for the complex and dense polyrhythmic beats that were growing inside of him.

Early in his life as a student, Jose was able to gain the support of guitar master Leo Brouwer who encouraged him to continue and to develop his distinctive approach to the instrument. In 1993 Jose was offered a recording contract and recorded his first CD for Magic Music Records and then for Ashe’ Records, entitled “MIEL”. This first CD was a great critical and commercial success and made it possible for Navarro to be invited to many International Music Festivals.

For the last 12 years, Navarro has lived in several European countries where he has continued to develop his technique and style as well as an international career, performing for many audiences around the world and building a major career, especially in Europe. Jose has also composed many scores for film, television, and radio while building an important discography as a solo artist. His desire to more fully express this unique style of Afro-Cuban jazz led him to begin performing with other virtuoso soloists who share the same musical flair and background. Today, The Navarro Virtuosi is celebrated not only as master artists individually, but as a diverse a multi-faceted ensemble presenting itself in various formats such as duo, trio, quartet, and full jazz band.